Nationalism In the Canadas 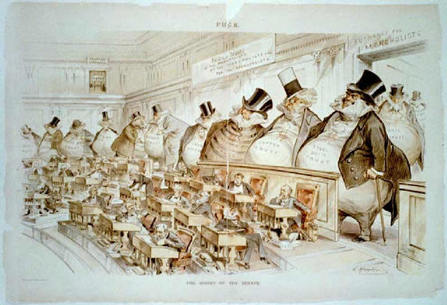 -Representative Government = members of parliament elected by public
- Responsible government = can be voted out if needs are not met for the people
- Governemnt of Upper and Lower Canada ruled by Oligarchy
- Meaning "Powered by small groups of very rich men"
- Citizens did not agree with the oligarchy government
- Many immigrants enjoyed the new land, however did not agree with taxes
- French felt outnumbered by British and treatened by oligarchy
- Robert Gourlay surveyed the public on their views of government
- Most were unhappy
- Gourlay was arrested and thrown out of the country
- William L. Mackenzie established "The Colonial Advocate" and critisized the government of upper Canada

When immigrants settled in their townships of Lower and Upper Canada, they were pleased with their land, however the inequal taxation and discrimination seemed to be a problem. The citizens of the new country wanted a responsible, representative ogvernemnt. However, the small Oligarchy seemd to have the most political power in Upper and Lower Canadas. The french-Canadians felt especially targeted by the English speaking government because they felt the Enlish immigrants were trying to outnumber them,. Robert Gourlay conducted a survey asking the citizens of upper and lower Canada on their views of their Government. As a result, most of the public was unhappy with the Family Compact/ Chateau clique. Gourlay was eventually arrested and thrown out of the country. William Mackenzie then took up Gourlays mission and establish his newspaper, which critisized the Governemnt  of Upper Canada.