•After the formation of Manitoba many Metis began to settle across the prairies
•They were unhappy about not getting title to their land in Man. And about beatings and mistreatment by troops sent to maintain ‘peace’
•The Metis’ self-imposed law of St. Laurent used to preserve buffalo was over ruled by the Canada
•Metis leaders Gabriel Dumont and others were arrested for punishing those who did not follow the law of St. Laurent
•Things in the Northwest were not good for the Metis and they were unhappy 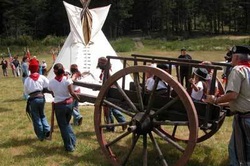 The Metis tried to gain title to their land but Canada turned down and aswell they tried to impose a Buffalo law but also turned down. The metis were unhappy with they way they were being treated by they troops that were sent in to control things.